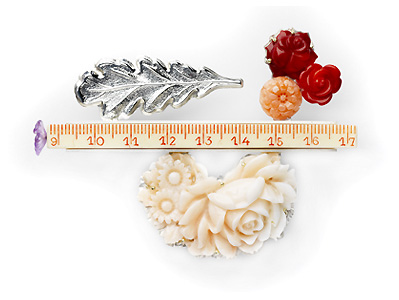 Every picture tells a story, but does the reader or viewer know how to read it and does it matter, and to whom? Makers of narrative jewellery, however defined, are perhaps more vulnerable than most to interpretation of their work. Many, of course, intend that. If, as Jack Cunningham’s jewellery does, it has its roots in a personal story or frame of reference, it feeds the work into a relationship with the wearer’s view of it, which may be a long way from where it started. It will be interesting to try to discover what the eventual wearers of the pieces in ‘On the Line’ see in these highly characteristic pieces, beyond their wonderful forms and colours.

Makers of jewellery as speaking objects are more open than most to alternative views of what they intended - the wearer, if I am anything to go by, bought it, or was given it, and wears it for what it means, to the donor and to them, and what they want it to say for them. But there is the added question about how much or whether the wearer’s audience notices, and whether they ask for interpretation or feel it rude to ask or comment. And must it be part of the success of the work that they should?

I have a pin that looks like a bottle-brush, made, as it happens, of re-cycled plastic bottles. The maker may have intended it to be a statement about a preference for non-precious materials, and probably environmentally friendly ones. The brush form says something else about traditional tools and tasks, and possibly about who performs them - the maker is female. I wear it in the lapel of an otherwise conventional suit, often when chairing a meeting, sometimes when teaching; there will almost always be someone who asks about it afterwards - it is striking enough for them to notice. And I wear it because on one level at least, I wanted them to notice, and possibly even to introduce an element of ambiguity into their assumptions about me, or about the content of a routine meeting or class. I may even be playing with their sense of familiarity with me, and I am certainly playing with the role of the suit in my interface with them. The suit reinforces (I nearly wrote gives me) the authority with which to run the meeting, and I feel that I look a better, or more neutral, shape in its tailoring, but it is likely to be read as a more conventional garment than is altogether an accurate reflection of my view of the task I am doing, or perhaps of me. So I am actually wearing the bottle-brush to modify the suit, though not in a way which will wreck its positive values.

That is a knowing, arch, and possibly overloaded context for wearing the work, and it is certainly consciously using the pin as a tool. It would be a mistake to suggest that this is the only intelligent, or enjoyable, response to a piece of jewellery which tells a story or takes a position, and I suspect that more often the wearer’s reaction, mine included, is conditioned by the way in which the work speaks to a frame of reference, emotional or intellectual, which is much more closely related to that of the maker in constructing the work. This means that whether or not the piece carries a title given to it by the maker, it has spoken to a condition or emotional position which the wearer is willing to crystallise, or at least mark, by the act of wearing it for others to see. It may refer, hint, commemorate, or enhance.

Jack Cunningham’s brooches occupy a liberal and inclusive position in the narrative spectrum; even when given a title they do not explicitly tell a single story, where the work of many contemporary narrative jewellers does, necessarily and intentionally channelling the reactions of the wearer and eventually their viewer. Instead, these brooches often have evocative shapes and details, which leave us to invest them with a particular sense of occasion or meaning. The house form is the most obvious; many of the other forms in the maker’s recent work are more abstract and their language deliberately more veiled, or simply multivalent.

Any wearer of narrative jewellery must bring to that role a good deal of emotional baggage. I come from a family background, which has a tradition of high expectations of its members’ professional competence. My suit is a uniform and a symbol, as well as a tactful concealer of personal aesthetic deficiency and a natural space on which to play with the brooch as a decoration, a contradiction (the aforementioned bottle brush), a badge, a long-service medal (three generations of baby brooches), or an enhancement of a sense of self and personal context, and an illustration of the force of coincidence. A brooch from Jack Cunningham’s ‘Journey’ show at the Lighthouse in 2000, entitled ‘Family Tree 1’, has exactly that resonance for me. At least three pieces from that show, of which this was one, were reflections of Jack’s own family ties, and grounding in a family base which is important to him. ‘Family Tree 2’, a companion piece to mine, echoed an important family loss. My brooch itself is an elegant silver tree with an asymmetrical branch arrangement, the individual twigs supporting moonstone fruit, each stone bearing a carved face. Its genealogical imagery is clear and clever, its form appealingly diagrammatic if not exactly abstract. I earmarked it on a day on which, as I was to discover later, a decision was taken on a promotion that was important to me, and finally came into possession of it in a week in which that promotion was ratified, and I could tell my father, to whom it mattered almost more than to anyone. He was to die later that year, not long after he could officially address his weekly letter to me using the title the promotion conferred - a manifestation of a strong sense of ceremony which sat oddly with a lifelong tendency to the Left and to a mildly reductive view of hierarchies, even the professional ones he valued. So ‘Family Tree 1’ is a bearer and supporter of a sizeable cargo of meanings and memories, some of them parallel to Jack’s own, but most, inevitably, the result of onward interpretation and personal association. And I defy anyone to say that this kind of response to jewellery as a speaking object is ‘merely’ sentimental. The maker’s intention must be at least partly to provoke an emotional reaction; perhaps the depth of the emotion is an indicator of the degree of success. And the complexities of the signal will ensure continued engagement with the piece, which is exactly as it should be. Watch this travelling space.