In the brooch Simul et Singulas (Together and Alone), I confront the fact that we come into the world alone and leave it alone. (figs 7.31 – 7.38) As a species we instinctively wish to be partnered through life’s journey, therefore the cameo and intaglio heads are facing their adjoining hearts though separated by a certain distance. In How Deep is your Love? the viewer is invited to consider the question from two angles; a question that we ask of ourselves, how deep is one’s love for another, or alternatively a question to pose, how deep is that person's love for you? The ruler acts as a sort of dip stick, as if it were actually possible to measure love and give it a score. In the brooch Where Now? the house shape is a reflection on how our past movements can be identified and marked, rather like a family tree, and ultimately begs the question, where do we go from here? Pegasus was designed following a trip to New York. I had visited the Metropolitan Museum and among the exhibits of South American artefacts was a curious gold exhibit which the Museum curators had not been able to identify in terms of its purpose or meaning. It was a small hollow formed gold figure in a prone position, approximately 15cm long, which appeared to be soaring or flying. As art can so often do, this amusing piece seemed to lift my spirits and symbolise the success of my visit to New York. The brooch depicts myself soaring as a winged being. Out of the Box shows a carved head, myself, outside a box containing a small carved skull – the box being a place that kills creativity, individuality, expression. The skull rotates and has a second skull image on the reverse. It is suggesting that we must step out of the box of conformity in order to flourish and grow as individuals, hence the cast sycamore seeds dominate the piece. 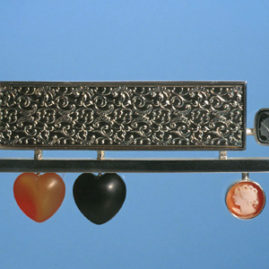 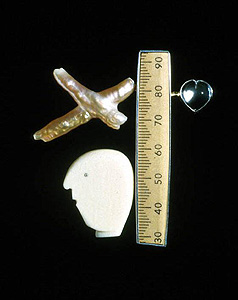 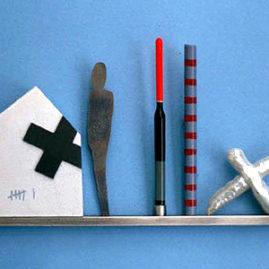 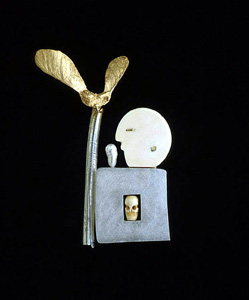 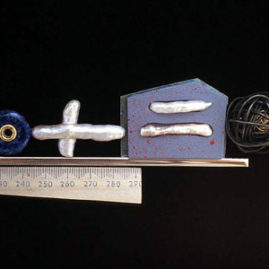 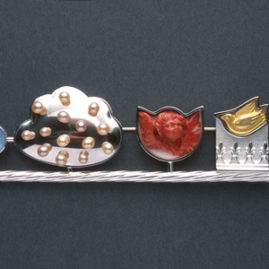 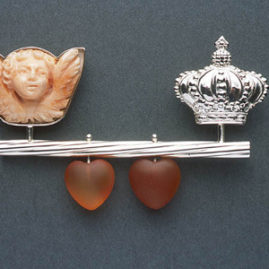 7.38 ‘Your Love is King’ 2003
Brooch; white metal, coral, carnelian
We use cookies to ensure that we give you the best experience on our website. If you continue to use this site we will assume that you are happy with it.Ok