Shortlisted for the Jerwood Applied Arts Prize 2000: Jewellery, I selected a group of works from the Journeyexhibition to show at the Crafts Council Gallery in London. (fig 6.52) This work was peer reviewed by writer and critic Ralph Turner, ‘Jack Cunningham confronts narration (much like American Goldsmiths) with vigour, using found objects, and culls from old jewellery – such as cameos.’ (Turner 2001: 50). During the summer of 2001 I showed a further body of work with the Crafts Council at the V&A, London in a solo exhibition Jack Cunningham: Jewellery. This too was reviewed by Turner, ‘The more restrained designs worked best, including a series of gold-leaf cruciform brooches with sticks of willow carrying ecological messages and cultural pearls erupting into full-blown figurative fantasies.’ (Turner 2001: 64). Here Turner was referring to the series X Marks the Spot, his ‘figurative’ analogy echoing the earlier description by Hansen. 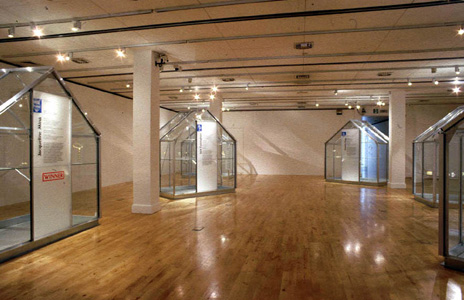 6.52 ‘Jerwood Applied Arts Prize’ 2000
We use cookies to ensure that we give you the best experience on our website. If you continue to use this site we will assume that you are happy with it.Ok